My fascination with Pomeranians started back in 2004 when I started working at a local pet hospital back in White River Jct., VT. There was this really adorable white Pom who I fell in love with. We took him for a "trial" overnight but then realized that we were not ready to be "Pom Parents" just yet. The following day I brought this Pom back to the owners. I thought this was the best thing for this Pom as we also had 2 "human" children. Well I started to head to work and cried and cried like a baby. I missed that Pom so much...by early afternoon...I had to have him. Took an advance out on my credit card and then he was going to be mine. We named him Taco...he was our oldest "furry" child and yes my "true Love".

While I was still working at the Animal Hospital a nice lady came in with some puppies and I fell in Love yet again. She was a local breeder who yes bred Poms. She had this little golden one that was left as there were only 2 puppies in that litter. We went down and saw this gorgeous boy Pom and fell in love. But as things sometimes happen the sister became available. Our "human" daughter asked if we could get a girl Pom and name her Belle...like the restaurant "TacoBell". She is our middle "furry" child whom we just adore.

Next but not too much longer...yes just a litter apart (8 months to be exact) we were notified that the "local breeder" was ill and not expected to survive. She had picked out as they say "the pick of the liter". I went down and immediately fell in LOVE. I had to have her...and so we adopted her. We wanted to name her Bear but we already had a cat named Bear so we thought...how about Kodiak (like the bear) then we could call her KoDi...Ko for Kodiak and Di for the local breeder Dianne...as a tribute. Shortly after we welcomed Kodi into our home...Dianne passed away.

While living in Vermont especially in the winter my husband would use the snow blower in the back yard and create an "Interstate" system. You could never see the Poms through all the snow but you could see my husband with 3 leashes and he was being pulled along. We never laughed so hard.

We moved to North Carolina back in June 2009...not long afterwards Kodi our "baby girl" developed a problem with one of her back legs. She underwent surgery but came out a trooper.

A few years later...Kodi developed Cushings...was on insulin and other medications and eventually went blind...but she continued to persevere through all the health difficulties that she acquired and was always happy, joyful and brought us so much joy...joy that we will never ever forget.

What the most strange thing is that my husband created 3 different voices...one for each dog...once Taco passed the voice stopped...now Kodi...yet another voice has stopped...Belle our middle "furry" child is still talking a mile a minute.

Taco our oldest passed away on Feb 13, 2017. I found your site via Rainbow Bridge and knew that I wanted my "true love" to always be remembered. I had 2 candles made and continue to admire my little boy...especially when he lights up.

So now...Kodi has passed due to a stroke on Jan 13, 2020 and I immediately thought I needed another candle. This time...a color version was available and knew that along with her "furry" brother this would be a wonderful tribute to my children.

I am not looking forward to when our "middle" child heads towards Rainbow Bridge but know that you will be hearing from me again.

So as I end...my family is the joy and love of my life...I have a truly wonderful husband, 2 children who I am so very proud of and 1 grandson who is the joy of my life and yes "3" amazing Pomeranians...2 are now my angels and one here who we need to comfort but is doing okay but missing her sister.

You wanted to know if we would give permission to use Kodi's picture with your company and I just couldn't think of a more wonderful tribute to our little girl. 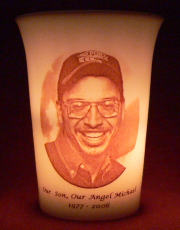